Weapons (or Power-Ups) are the combat components central to the Wipeout series. Initially used to slow down rival craft, these weapons are now capable of damaging opponents (and even eliminating them). The different types of weapons vary in offensive weapons and defensive weapons.

Mini-Gun (FEISAR) - Simply press B to start this super weapon, and it will continuously fire high-speed bullets for 10 seconds. Most of the time it will take about only one second of continuous fire from this weapon to eliminate an opponent. Use of the Cyclone in the game will make one round eliminate one opponent. This weapon evolved into the Cannon, although single-barreled like the Proton Cannon in Fusion. There is also a similar weapon in 2097 that can be used through a cheat code (with a similar weapon icon), with unlimited ammo (for as long as the fire button is pressed), but will actually slow the craft down upon firing.

Shield Raider (AG Systems) - Easily the most powerful weapon in the game. It is fired like a missile, and you have to gain a lock on the nearest craft to fire it (it has no rear-lock, however). If an opponent craft is hit by this green missile (characterized by a distinctly loud explosion), its shields will be completely drained, with only 1% of energy remaining. This means just a small hit, even from a solid ram on the victim, can cause an easy elimination. Though it is a dangerous weapon of mass destruction, it also restores a small amount of shield energy to your craft. As a specifically shield-draining weapon, it evolved into the Energy Drain, then the Shield Drain, and finally the Leech Beam; however, in Wipeout Fusion, there was also another weapon bearing another similarity to Shield Raider, in the aspect of making the target fragile to following attacks: the Nitro Rocket.

Energy Sphere (Auricom) - Although not the most powerful in the game, it can be fun to use. This is a charging weapon, so hold down B to charge up the sphere to get maximum charge (identified by a sound and yellow vapor trails). As the sphere charges, it becomes more powerful. A direct hit would often cause an elimination, although this is difficult as the weapon has no lock-on feature. However, the sphere can pass through opponents, allowing for multiple hits. This weapon is similar to the current design of the Plasma as it deals heavy damage rather than instant-elimination. It may also be another reason why the Plasma is not featured in 64.

Power Snare (Qirex) - In contrast to the other super weapons in the game, this super weapon could be considered the weakest in the game. When activated, the craft deploys a yellow wall several meters in front of you. Any craft that travels through this wall will lose a reasonable amount of shield energy. This weapon was reused in Wipeout 3 as the Force Wall, although said weapon is more of a disruption weapon that does not produce damage.

Stealth (Piranha) - This super weapon is much more defensive than offensive, but still very useful. When activated, the craft becomes partially invisible and also immune to physical damage and weapons systems. Opponents can also be damaged by flying through them. This weapon was reused in Wipeout 3 as the Cloak, although its effects are reduced, and given its ability to damage opponents by flying through them, it is also similar to the Penetrator in one way.

Super Missile (FEISAR) - FEISAR's new Super Missiles have been customised from the standard missile system by their in-house weapon development team in rural area of Sicily. The missiles are vastly stronger than standard missiles as they have far greater explosive power than standard to accommodate it being a super weapon. Three targeted missiles are released at once, locking onto the three nearest opponent craft. If there is only one opponent ahead, all three missiles will lock onto it, and the chances are it will be destroyed. Super Missiles are simple yet effective weapon, as their combination of speed, accuracy and firepower (with noticeably more violent explosions than the standard Missile) make them a versatile tool in combat. This super weapon is very similar to the Multi-Missile in Wipeout 3. (NOTE: A development of this weapon might have been the cause of the 2164 Temtesh Bay Disaster, where said missiles caused the explosions which led to the collapse and cave-in on the indoor mining area.)

Seismic Field (Van-Über) - The Van-Über weapon research facility in Dresden has excelled itself with the new seismic field that was unveiled at the Zero-G trade fair earlier this year. When fired, a highly destructive sphere is hurled forward down the track. Direct hits will cause severe damage and hurl around affected contenders with a great force, and fans will be pleased to know that an elimination is highly likely. When the sphere is active, it will darken the sky and possibly give it a "thunderstorm" effect. The Seismic Field does not lock-on or bounce off walls, so aiming is difficult - use this super weapon on straight areas as this is meant to be treated like a more chaotic version of Plasma Bolt.

Bio-Snare (G-Tech) - Harnessing aggressive bio-technology originally developed for sewage treatment, G-Tech's Bio-Snare super weapon fires a biological projectile forward down the track. On landing, it grows into an obstructive entity that will surround the craft with a green "infection" all over it, and will also affect its control and steering behaviors. Craft that hit the Bio-Snare can get rid of it by entering the pit lane and recharging their shields, or persisting until the "infection" fades away. Despite this being labeled as a super weapon, this may not be considered impressive enough to be one, as it does not cause damage at all upon contact.

Orbital Laser (Auricom) - Auricom had to launch a huge laser satellite system in order to complete the development of this vicious weapon. At the very least, it demonstrates their determination to do well this season. Pilots lock onto an opponent craft using a laser sight, then when activated, the craft's coordinates are transmitted to the satellite. Nearly instantly, a piercing energy beam is fired from the satellite's weapons system. However, this weapon has no effect in subterranean zones as satellite communication is disabled underground. Also, for such an impressive-looking weapon, it only does minor damage (comparable to the standard Missile) - its effectiveness stems mostly from the ability to instantly stop opponents in place and dazzle them, leaving them an easy target for a few seconds.

Power Swarm (EG-R) - EG-R's new Power Swarm weapon has thrilled race enthusiasts across the world. Spurning brute force in favor of tiny, swarming drone weapons, pilots lock onto opponent craft either in front or behind. The drones are fired from an isolation unit beneath the craft from which they swarm around the opponent, firing small rapid-fire energy bolts until all their ammo is used up. They are capable of inflicting moderate damage upon the craft over time. The drones persist on your craft until you activate a shield or enter the pit-lane to regenerate your craft's shield energy.

Nitro Rocket (Tigron) - True to form, Tigron's new super weapon promises devastating results. After locking onto an opponent craft ahead, a liquid nitrogen projectile flash-freezes and crystalizes the craft for several seconds, and bringing along with it heavy initial damage once the projectile hits the target. This causes the craft to become extremely vulnerable to almost any type of damage thereafter, to the point where an impact with a wall, weapon or another craft during this period will almost certainly destroy it. The crystallized state can, however, be reversed by environmental heat (for approximately six seconds) or by passing through the pit lane. Next to the Shield Drain, the Nitro Rocket is one of the most effective super weapons in the game, most likely securing an elimination of the opponent.

Shield Drain (Xios) - A favourite of Natasha Belmondo, the Shield Drain figuratively drains the life from the opponents. Once the pilot locks onto an opponent craft, a siphoning link is formed between both craft and shield energy is sucked from it until there is nothing left to take, or until the distance between the two becomes too far, breaking the link (the link ignores solid obstacles, however). It is very similar to the Leech Beam. It is worthy to note that Shield Drain always works (unless the opponent activates the Shield) with the same effectiveness - no matter how much shield energy the victim possesses, your craft will always have its shields fully restored (and the target craft will suffer the same amount of damage, even if the attacker is fully replenished during the drain process). Perhaps the most useful super weapon in the game, the Shield Drain essentially ensures that Xios craft are practically as durable as the Tigron ones.

Penetrator (Piranha) - Another incredible innovation from Aries Piermont's team, the Penetrator turns the firing craft into an actual missile as the nose is charged up with explosive energy. Once the pilot locks onto an opponent craft, his/her own craft arms its nose area and it literally fires itself at the opponent. Major damage is caused, following a blinding explosion. If no lock-on is acquired, the craft will fire itself in the direction of aim. Upon firing, while homing into the nearest craft, the craft will activate a fast autopilot. Since with Penetrator, your craft serves as a kinetic kill vehicle, this super weapon will also cause damage to your own craft (but not as much as the target) as you will eventually ram the target. This super weapon can be activated without lock-on to take advantage of its speed boost, making it an improvised super Turbo - however, the ship will be almost impossible to steer in this case, so brace for impact!

Diagram of Weapon evolution throughout the series 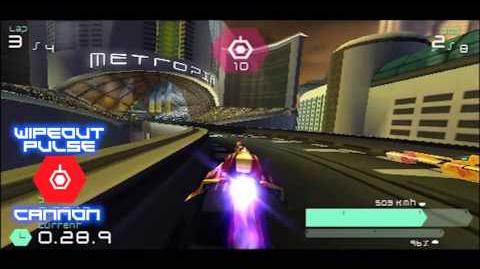