Tigron Enterprises (pronounced Tee-gron) were an Anti-Gravity racing team based in Russia, competing in the F9000 League. The team, along with Van-Über, were one of the only two new teams in Wipeout Fusion to make a return in Wipeout Pure and Wipeout Omega Collection.

The Russian industrial sector experienced a sharp downturn in the late 2140s. As a result, the Russian government was subsequently overthrown by a local crime syndicate, bringing the whole country to a social climate reminiscent of the USSR era of the 20th century.

Tigron Enterprises was a conglomerate formed by the same criminals running the country at the time. After buying out the failing Qirex company in 2149, Tigron would enter the competition in the following season using Qirex technologies, but also bringing their own craft designs and aggressive tactics to the fore.

Over the next twenty years, Tigron would make very few friends in the league. Their heavy craft lent themselves more strong-arm tactics at the expense of finesse and speed. More often than not, one or more of the other teams would lodge a complaint after an event. Not that it made any difference – maximum impact, maximum exposure, and results at any cost were the by-lines at every pre-race briefing.

The criminal organization behind Tigron Enterprises involved themselves in every moneymaking opportunity that Anti-Gravity racing had presented to them, from selling spare parts to restoration enthusiasts from the very plant which had once produced the legendary Qirex craft to playing hardball behind the scenes with the league. One example of the latter was the alleged disappearance of over 2,000 people, from government officials to factory workers, to be employed by Tigron's AG racing project.

By the time they acquired Qirex, Tigron uncovered documentation detailing a range of illegal activities by Overtel Corporation, the director of the F9000 Race Commission, from when Overtel was still the parent company of Qirex. Tigron would thus use this incriminating information to blackmail Overtel into allowing them to actively flout the rules. This was said to have gone so far as to fix races in the later years.

Ultimately, Tigron's involvement in the corruption scandals would cause their downfall when the F9000 League was suspended in 2170. Many key members of the crime syndicate behind the scenes had been flushed out during the following investigations, leaving Tigron's properties abandoned. Not long afterwards, the syndicate's regime was also deposed.

Sometime during the FX300 League, the last remaining Tigron craft was re-commissioned by Qirex. It was used for training purposes to get some of their pilots accustomed to heavier craft. After it had served its purpose, Qirex director Feliks Levovich ordered its dismantling, wanting no remnants of Tigron to survive.

However, it was long rumoured that before their collapse, Tigron had been working on a radical successor to their F9000 craft. Features of the design included a tightly packaged tri-hull construction, seemingly designed for illegal ramming techniques, and quad-thruster "cluster thruster" engine to push the craft. The Fall of the F9000 halted any investigations into the craft, and all records were destroyed. This original chassis, built before Tigron's collapse, was said to have been smuggled out of the factory, and anyone who had the right contracts and enough money could jump into the cockpit and pilot it. This cult favourite, known as the K-VSR, reappeared mysteriously during the FX350 League.

Although Tigron were one of the most ruthless teams in AG history, their craft was among the most popular ones in Wipeout Fusion. The craft has an impressive top speed, handling, and shielding, along with decent thrust and weapon power. Because of these stats, this craft requires pilots that are strong enough to control them and have an aggressive racing style, as seen in both their pilots.

Returning in Wipeout Pure, the Tigron ship is somewhat similar to that of the basic F9000 model. Due to its stats (especially handling and thrust), it can be considered the "superior version" of Triakis, but that wouldn't be the case. While its speed may be able to match Triakis, the Tigron's shield is just slightly weaker. In addition, it handles slightly worse than Qirex or Assegai.

In the Omega Collection however, the new Tigron ship is completely different from its predecessors, with it having a triple-hulled chassis, having a priority on speed above everything else. It also has acceleration power on par with Icaras, and requires precise control to get the most out of. One thing that's also unlike the other Tigron ships of the past is that the new Tigron has weak shielding, which means avoiding combat and damage would be necessary. 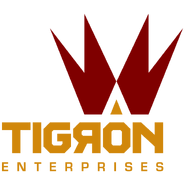