Natasha Belmondo (born 8 June 2127) is the Executive Chairwoman of the Anti-Gravity Racing Commission and President of the Belmondo Foundation. She is most notable for being a former pilot, claiming a number of F9000 championships for Auricom and (later) Xios.

Belmondo's great-great-grandfather, Pierre Belmondo, witnessed her birth on 8 June 2127, in Poitou-Charentes. He declared her a future title-winning pilot before passing away merely hours later at the age of 123. She was raised in Poitou-Charentes as well.

Belmondo initially joined the famous North American team Auricom at the start of the F9000 League in 2156. She quickly became a superstar after she won the championship that year.

In a shock move, Belmondo was signed by newcomers Xios for the 2159 season, a decision that would create conflict between the two teams. Her first season with the ambitious team saw her pip Tigron pilot Omarr Khumala to the pilot's championship by a single point on the final race of the season. Xios also won the constructor's championship for the first time, thereby cementing both Belmondo and Xios amongst the F9000 elite.

A staunch supporter of her great-great-grandfather's belief in the sport's ability to benefit mankind, Belmondo frequently launched scathing attacks on members of the F9000 Commission, accusing them of 'betraying' the vision of her ancestor. Belmondo made no secret of her desire to join the commission in opposition to the majority of the F9000 membership.

Sometime after the fall of the F9000 League, Belmondo became associated with the Belmondo Foundation, eventually becoming President of the Foundation. 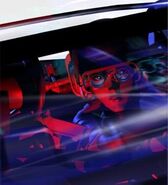 Retrieved from "https://wipeout.fandom.com/wiki/Natasha_Belmondo?oldid=16441"
Community content is available under CC-BY-SA unless otherwise noted.