Bitter rival and twin sister of 'Arian' Tetsuo of the Qirex Racing team.

Arial Tetsuo (Japanese: 哲男 アリアル Tetsuo Ariaru, 2030 - unknown) was a pilot for Auricom during the F3600 League. After retiring from AG racing, she became one of the most influential politicians during the mid 21st century. She also had a fierce rivalry with her twin sister, Arian Tetsuo of Qirex.

Arial and Arian were born in a suburb of Tokyo in 2030, with Arial the eldest by a few minutes.

The twins were only 5 when the scientists debuted their anti-gravity vehicle in the Nevada desert, Arial and Arian had something in common for once. They were both intrigued by anti-gravity technology and desired involvement with it.

Arial was signed to the new Auricom team following her outstanding performance in the Anti-Gravity Youth League of Japan. She made her first appearance in AG racing as a test pilot during the Anti-Gravity Racing Championships in 2048, at the young age of 18.

Arial had always been praised for her natural talent, controlling the heavy Auricom craft with relative ease. This was in stark contrast to her sister's aggressive, "muscular" style. In one incident, Arian tried to punch Arial after a race, but Arial avoided it and Arian suffered a few broken fingers after she hit a brick wall.

During the mid 2050s, Arial decided to retire from AG racing and proceeded to move into politics. Her down-to-earth, yet firm-handed approach had led to a personality cult around her, despite her sister's attempts to undermine her.

During her career, Arial single-handedly changed the way young people thought about politics all over the globe. Of all her contemporaries, she seemed most in tune with the minds of the youth, and she appeared completely humble through it all.

Infamously, Arial was murdered by an unknown assassin whilst opening a raw egg bar in Tokyo. A state of mourning was observed around the world.

To date, the murder remains unsolved, as the Tokyo Metropolitan Police Department has found very little evidence linked to it. Also, it appears that the murder investigation of Arial has been suspended indefinitely, given the aforementioned lack of evidence, thus marking the murder as a cold case. However, the public alleged that Arial's sister Arian was somehow involved in this murder, although this has yet to be confirmed.

F9000 League pilot Nami Mishima of Van-Über Racing Developments had been frequently referred to as "Arial-in-waiting" by the media, as she and Arial share the same nationality, have similar appearance, and are popular with younger fans. She also tipped to take over Van-Über's lead pilot position following the retirement of her teammate, Songen Grey.

However, like Arial, Mishima had been constantly plagued by an unknown individual intending to harm, or perhaps kill her. As a result, she suffered from various technical incidents in her craft throughout the league. Several incidents included severed brake channels and a shattered balance generator.

Arial Tetsuo has become a cultural icon of the Wipeout series, through the use of her image in other media.

Arial was used as the mascot character for British techno-pop band Fluke for the release of the song Atom Bomb. She appeared on the cover of the single (created by The Designers Republic), and in a live-action form in the music video.

Arial reappeared, in a FEISAR suit, for the cover of PlayStation Magazine (Britain) issue #14. This was a promotion for the release of Wipeout 3.

Arial after a defeat

Arial's craft during the F3600 League 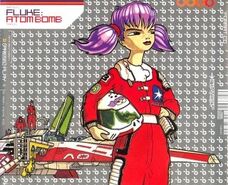 Arial on the cover of Fluke's Atom Bomb OP 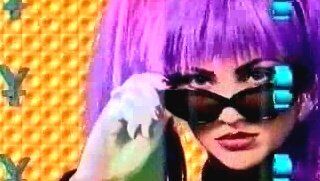 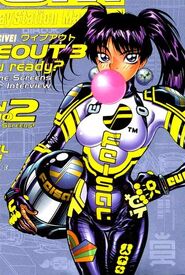 Arial, in a FEISAR suit, on the cover of PlayStation Magazine
Community content is available under CC-BY-SA unless otherwise noted.
Advertisement